The Companion Animals Department (CAD) is dedicated to protecting and improving the welfare of the millions of animals kept as pets, working animals and athletes in the UK.

The term 'companion animal' is acknowledged to cover over a thousand species of companion animals although the department's current remit focuses on the following species: 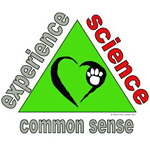 CAD believes that good welfare is best achieved through applying a balanced combination of science, experience and common sense. The department uses a logo called the 'Welfare Triangle' to reflect this approach to companion animal welfare.

Everything the RSPCA says and does to help companion animals is based on science, experience and common sense.

To empower people, both within and outside the RSPCA, with knowledge about companion animal welfare.

On behalf of the RSPCA, we generate, collate, review and communicate science and good practice to encourage and enable people to protect and improve the welfare of companion animals.

For example, the department has provided scientific and technical information for RSPCA responses to several government consultations relating to secondary legislation under the Animal Welfare Act, 2006. These include:

2. Representing the RSPCA, with respect to companion animal welfare, to external bodies, committees and working groups.

For example, one of our scientists recently gave technical evidence at both the Associate Parliamentary Group for Animal Welfare (APGAW - England) and Bateson Inquiries into dog breeding.

We use scientific information, experience and common sense to produce information that can be used by the public to ensure that they act responsibly and meet their animals' welfare needs.

4. Commissioning scientific studies into companion animal welfare.
For example, in 2008 we commissioned an independent scientific report into pedigree dog breeding in the UK and have previously funded studies investigating behavioural problems in dogs and the spatial requirements of pet rabbits.

Read reports and resources produced by our companion animals department.

Find out more about who we are and who we work with.

Print What we do